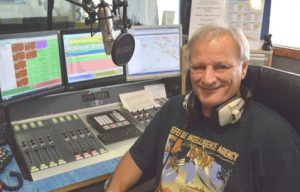 Bob started his broadcasting career back in 1967 when British Forces Broadcasting Stations both in this country and abroad trained him in all aspects of running a radio station. He held various post from chief engineer, head of training, programme controller to head of engineering.

On leaving the forces he became involved with hospital radio where he has remained active for the last 40 years working on stations up and down the country from Barrow-in -Furness to Farnborough, Weston-super-mare to Bedford.

While at Bedford he became involved in the Splash 107 RSL for the 1996 Bedford River Festival and a year later whilst in Weston-super-mare almost by accident became the leader of a local radio group, organising and leading WSMfm through a final RSL before applying for a full time licence.

In 1999 he relocated to Huntingdon and became involved with HCR104fm presenting the breakfast shows through to close own in 2008.