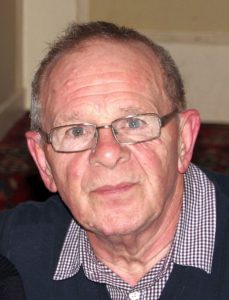 I have had alove of popular music, as it was called then, before I was even a teenager,  but the only way to listen to it then was on vinyl records as there was very little on the radio and even less on TV.

This all changed in 1964 when Radio Caroline and the other offshore radio stations gave us pop music around the clock and it was a whole new world. I thought I would love to do that and so the seeds were sown that have never gone away.

A career, marriage, raising a family consumed my life until a dramatic time in 2001 changed everything in my life and I decided to join Hospital Radio where I lived in Norfolk. Local Radio followed which I was involved with until moving back to The Fens in 2014. In 2015 I got the opportunity to join HCR104fm and this has been a terrific milestone making new friends at the station and with the listeners. I am still involved with Hospital Radio and love every minute of broadcasting both there and here on HCR104fm. When I first put the fader up and said “you are listening to Mike Wing,” I never imagined it would turn out like this and its all down to you the listeners  being there,  that we are here. Thank You.

Favourite Group. Most of 1960’s British groups + The Byrds.

My other big hobby, my railway.