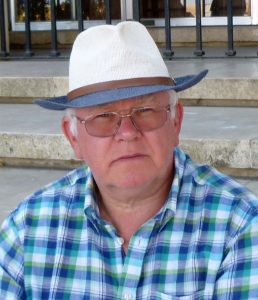 When I left school I worked in a couple of laboratories, but found the work boring, then tried my hand as a photographers assistant. I enjoyed this job immensely, as it entailed me booking and looking after the models we used in our photoshoots. Alas, all good things come to an end as once again I got bored so joined the military, the RAF to be precise.

It was while I was in the RAF that I got my first taste of working in radio as I joined the stations radio and spent a year learning the trade.

I retired from the RAF in 1998 and started working in IT.

After I retired I wanted a good hobby and found it in HCR104fm.

I stated at the station in March 2017, as a producer, and was lucky enough to win the ‘Newcomer of the Year’ in the same year.

In October 2018 I finally got to present on air, on the Over to You show, where I’ve been ever since. I broadcast every Monday, Tuesday and Wednesday night.

I have also taken on the roles of both Training and Volunteer co-ordinator, since joining the station and enjoy doing both roles very much.

For my sins I follow Manchester City and enjoy going to the Cinema, computers and travelling to my second home in Cyprus when I can.