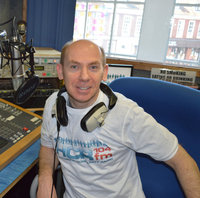 Paul started his broadcasting escapades as a Hospital Radio presenter at Royal Berkshire Hospital in Reading on Hospital Radio Reading where he spent 15 years presenting the Thursday Evening Request and Entertainment show.

Born in Henley-on-Thames in Oxfordshire Paul lived in and around the Thames Valley for most of his life.

In 2012 Paul moved to Little Paxton and within a few months had found a new radio home HCR104FM where he now presents the Saturday morning show Saturday Brunch with such features as Just The Facts, The Retro Chart, The Wedding First Dance, The Saturday Connection and the Top 10 Movie news.

In June 2016 Paul got married to Kgaladi and now lives in Huntingdon.

Paul’s day job is as a Marketing Manager for a global IT Services company.

Paul is an avid Chelsea fan and is a keen traveller having been fortunate enough to travel to most continents in the world with his favourite cities being New York, Singapore, Sydney, Cape Town and Vancouver.

Paul has a wide variety in music taste but favourite artists include Coldplay, U2, Beyonce, Mariah Carey and Jean-Michel Jarre.

The first record Paul ever bought was a small disco hit in 1978 by Gene Chandler called Get Down.