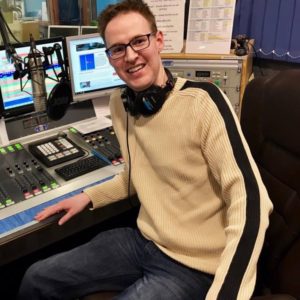 Simon has been with HCR104fm for 15 years presenting various programmes across the network and even popping up in the wee small hours just to play songs you can’t play during the day – you know the ones we mean!

Over the years, his music collection has expanded to include a wide range of musical genres from the latest main-stream tracks to artists operating under the surface struggling to make a break though; often great talent waiting to be discovered. ‘Music you have yet to hear, but should be in your collection’, is just one way to describe his programme on Saturday nights, another way is “A Musical Education” but probably the most popular from you the listener is “just great music”.

Each Saturday night Simon enthusiastically plays music that often doesn’t get aired too much on mainstream radio and he delights in bringing new music and artists to his audience. Regular features include ‘The Wall Tracks’ where he revisits songs played during earlier shows; ‘The Double Header which kicks off the second hour and where he plays two songs by the same artist; ‘Start to Finish’ where he picks an album and plays every track in order over a number of weeks; and ‘The Regulars’ which crop up every week – his beloved Fleetwood Mac, Van Morrison and Bruce Springsteen who always rounds off the programme in style.

And if that wasn’t enough he tries to keep his audience in full musical health with ‘The Doctor’s Prescription’ where he plays a song chosen by his musical mentor and former history teacher Kenneth Wood and musical producer, now renamed ‘The Music Doctor’!

Simon has been on the radio scene for many years, his musical collection is just bursting at the seams, and Saturday night is just perfect to get down and play the great tracks interspersed with information about the history.

So where did it all start? Back in May 1999 when he received a telephone call from Hospital Radio Bedford asking him for an interview and not to quote history, but “the rest they say is history”.

His great belief and extensive knowledge in this field this has led to the creation of ‘A Different Beat’. He sub-titles the programme ‘A Musical Education’, and that is exactly what it is. Two hours of stimulating music.

Outside of the studio, you find him at various concerts around the country catching the artists while they are around and having a great time, as the golden oldies can still shake their stuff!

Oh yes, when HCR104fm last checked, his favourite past time was purchasing and searching for CD’s, and coming to terms with the fact that CD’s are on the way out and it’s all downloaded now. So which CDs you ask does he have in his collection, well before you ask such question you better clear the afternoon as it’s an extensive list.

So, if you’re mooching around the house on a Saturday night and want some stimulating music in the back ground, then you know the place.

Oh yes, do not be surprised that each show ends with a track by The Boss, Bruce Springsteen……it’s Simon’s favourite artist!