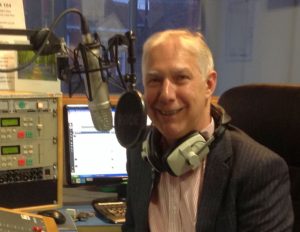 Tony has been at HCR since the very early days of its initial planning and was the first voice heard on air on the launch day of HCR104fm.

Since then, we have tucked him away on the Late Show, where we think he may have a listener or two!   If you have a sleep problem give him a listen and you will be asleep within minutes (Joke)!

Tony is our Music Director, responsible for choosing the music you hear and constantly bringing new sounds to the station. He chooses the ‘Single of the Week’ which he plays every night Monday to Thursday at 10.20pm.

Outside of his radio life,  Tony runs a successful hairdressing company and when he is not working, he enjoys the odd holiday or two, well who doesn’t, favourite destination is Dubai. His other interests include reading, football, watching that is, and cooking.

If you want to listen to Tony, tune in between 10pm and midnight Monday to Thursday where you will hear him play a great mix of music.

It’s the only way to end the day and who knows, you may be his second listener!