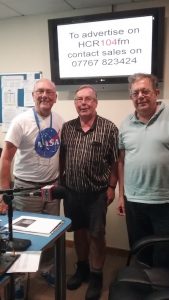 In this edition of The Sky Tonight, the Perseids meteor shower and how you can view this display during the month of August. And what on earth is meant by some of those terms astronomers use such as ‘perihelion’, ‘opposition’, conjunction, brown, white and red dwarfs and ‘pulsar’ and ‘quasar’?

Did ‘Eagle’, the ascent stage of Apollo 11’s lunar module really crash into the moon 52 years ago as we were told when Neil Armstrong and Buzz Aldrin were safely reunited with Command Module Columbia pilot Michael Collins? If not, where is it and could it ever be retrieved and returned to earth ? What a museum exhibit that would be!

A mishap on the International Space Station when a Russian module ‘bumped’ into it meant that there needed to be a correction to return it to position – there was no danger to the resident crew, but we tell you more in the podcast.

And in the August night sky – Jupiter and Saturn reach opposition on August 20th and 21st – both can be seen as evening sky objects. There’s more of course – but only if you listen!

More from this particular corner of the universe next month on Tuesday September 7th at 19:00.