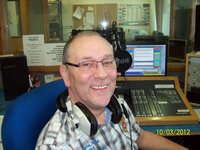 Pete was born ‘in the early 50s’ in a Lancashire mill town but grew up in Liverpool during the explosion of the ‘Mersey Sound.’ He relocated to March, Cambridgeshire in 1986 with his young family and now lives with his partner in Wisbech. He loves the county but is also a great believer in Huntingdonshire being recognised as a geographical county in its own right.

His interest in radio was sparked by the pirate radio stations such as Radio Caroline and Radio London when they took to the air in the ’60s. On leaving school he was interviewed for a job in the (then) Ministry of Posts and Telecommunications. Legislation had just been passed to outlaw offshore radio and one of the first questions he was asked was, ‘Do you agree that the pirate radio stations should be made illegal?’

Pete said that he felt that the stations were giving the great British public what it desperately wanted and should stay! One of the interviewers peered over his glasses and scowled but then Pete swears he detected a slight smile and a guarded wink. Right answer or not and probably for his truthfulness, Pete was offered the job and continued working in the public sector in various administrative and management roles over the years in Liverpool, Fenland and Peterborough until his retirement in July 2012.

Pete was a school governor for sixteen years and also clocked up over 30 years with the Talking Newspaper for Blind People covering March and Chatteris. A regular presenter on hospital radio in Norfolk, he took to the HCR airwaves in February 2012. “I can truly say that my only regret is not taking the plunge sooner. My advice to anyone whatever age is to go for it – never think you are not good enough.”

Pete is now retired but continues with his voluntary work and can now give more time to his radio work. He was awarded the British Empire Medal (BEM) in 2013 for services to the Crown covering 45 years in local government and the Civil Service and for service to the community of Cambridgeshire, an achievement of which he feels justly proud.

Who are you ‘heroes’ of radio?
The late ‘greats’ such as Ray Moore, Alan ‘Fluff’ Freeman and Kenny Everett who were all different from each other in their presentation styles but nevertheless masters of their art. “No-one will ever come near them,” says Pete.

Your pet hates?
Unsafe driving of all kinds and inconsiderate, loutish behaviour with no thought for others. Bad grammar and punctuation also rattles him especially when the apostrophe is misused. Isn’t that enough?

Favourite music?
Pete’s musical tastes cover a wide spectrum. Motown and Soul figure hugely in his home collection but if you looked through the keyhole, you would also see light classical collections, 50s, 60s, 70s and 80s, country, music from the movies and easy listening orchestras such as Ray Conniff, Glenn Miller, James Last and Mantovani.

What’s your most memorable ‘radio moment’
Apart from the first time I sat behind the mic at HCR104fm, the most memorable moment was when we broadcast a three hour programme celebrating 50 years since the advent of the pirate station Radio Caroline. ‘I was given free rein to produce and present this programme which was my own work – something I could not have done without the help of others. We used vintage jingles, songs and memories from the time of the pirates and even some vintage commercials. It was pure heaven for me and I was very grateful that Bill Hensley, our MD here at the station gave me his full backing.’

What makes you laugh?
Any Peter Kay performance – “the humour is very ‘northern’ but I think everyone can relate to it.” Pete also is a Laurel and Hardy fan and loves ‘daft’ humour. “Unfortunately, many of the comedians I love are no longer around… long live You Tube!”

Your perfect day?
Relaxing on a secluded beach with the most perfect clear blue-green sea lapping at my feet.

Are you technically challenged?
What’s a screwdriver…?!